Please note that with effect from 20th January 2021 Marsh Lane, Hampton in Arden will be gated just north of the railway bridge which accesses the Marsh Lane Nature Reserve car park, to the west of Siden Hill Wood.  The gate is going to be locked overnight.  Solihull Council have deemed this has become necessary due to frequent problems of anti-social behaviour, fly-tipping and other forms of environmental crime at Bradnocks Marsh.

The closing/opening times will be as follows:

The Reserve remains open.  Members have been helpful and responsible during the Covid-19 Pandemic.  Please continue to co-operate by:

Can all visitors please ensure they follow HM Government guidance in respect of hand sanitisation and social distancing, and ensure they avoid the Reserve  if they or any family members (or anyone else you may be in contact with) are showing any symptoms associated with Covid-19.

1st and 5th May – Records updated.

5th and 7th May – Photographs added.

There was a single Dunlin on the Car Park Pool islands all day and there was also a single Common Sandpiper, two Little Ringed Plovers, one Redshank, one Shelduck and two drake Teal.

Mostly overcast with some showers.

A Red Kite flew over at 11.30 am and a Cuckoo was heard, the first calling bird recorded so far this year.

An Egyptian Goose flew through, a pair of Great Crested Grebes joined two male Teal and there was a Common Sandpiper, five Little Ringed Plovers and a Redshank.

A Shelduck also flew over in the early afternoon and the Willow Warbler remains in song at the back gate and it was heard to include some Chiffchaff notes in its song.

A Barn Owl showed on occasions at both the beginning and end of the day today and a possible Yellow-legged Gull on Railway Pool in the afternoon was a different bird to yesterday.

At least two Garden Warblers were in song, possibly three and the Lesser Whitethroat was heard occasionally along the Old Road.

Lastly, a Muntjac was seen around the car park.

Today’s main highlights were a drake Garganey that was initially on Car Park Pool but moved to Railway Pool later in the day and showed reasonably well from time to time. A tundrae race Ringed Plover was a new arrival and other waders included five Little Ringed Plovers, a Common Sandpiper and two Redshanks.

A Yellow Wagtail flew over Railway Pool and from early afternoon a first-winter Yellow-legged Gull roosted on Tern Island and then flew around in the late afternoon and early evening. There was also a first-summer Herring Gull present.

Two of yesterday’s five Dunlin remained on Car Park Pool and just after 8.45 am, a Wood Sandpiper appeared on Railway Pool and after initial elusiveness, showed really well in front of Oak Hide in the Marsh.

A Cuckoo flew over the car park at mid-day but was again not calling. 20 Swifts went over Railway Pool along with four Sand Martins at 6 pm; a pair of Teal remain on Car Park Pool and a Garden Warbler was in song by the car park gates with a second around the Back Gate Copse. 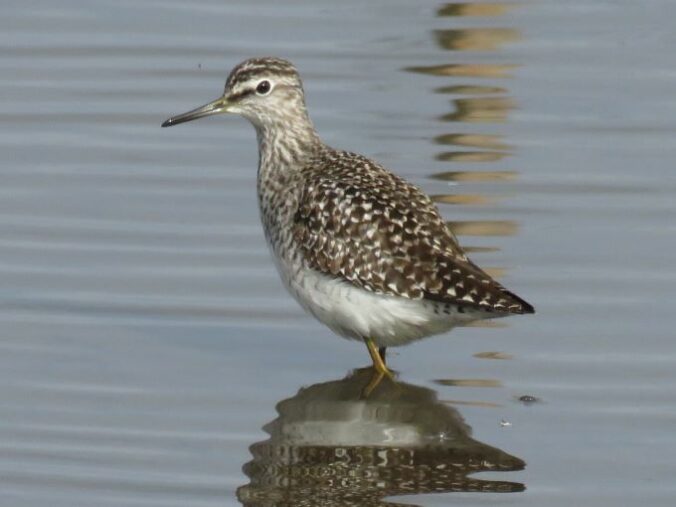 Overcast, rain, fresh southerly wind with the rain clearing in the early afternoon and sunny intervals.

Three Dunlin were new in and there were five Little Ringed Plovers today, together with a lingering drake Teal and also a Great Crested Grebe.

19 Canada Goose goslings were counted and the two Oystercatcher chicks were still present on Car Park Pool where there were three new Lapwing chicks.

Later in the day the Dunlin count increased to five and there were four House Martins around the car park before moving on at 2 pm.

As the weather improved in the afternoon, 40 Swifts went over to the north and a tundrae race Ringed Plover dropped in.

The only records today were of a Common Sandpiper and a Redshank.

There were no records during the day but, in the evening, two different Barn Owls were seen, one flying around the North Causeway Bay at about 8.20 am disturbed by a Fox and a second around the car park at just after 9 am.

The female Goosander with two now much older chicks were roosting on one of the car park islands and the evening Common Tern count was the best this year so far, amounting to 35.

Other records of note included a Great Crested Grebe on Car Park Pool (there seem to be no nesting attempts this year), a Shelduck on Railway Pool along with a Common Sandpiper, four Little Ringed Plovers spread between the two pools, one Little Egret, two Teal, a Redshank, two Herring Gulls, the Oystercatcher with two chicks on Car Park Pool and at least 2200 adult Black-headed Gulls and ten newly hatched chicks. A Roe Deer was feeding around the margins of Railway Pool at dusk.

What was presumably yesterday’s Cuckoo was seen again, briefly, around the car park but it was not in song.

Two Garden Warblers still in song were around the back gate area and by the car park gates. There were still a pair of Shoveler on the pools, two Sparrowhawks were seen, Common Terns reached at least 19 and butterflies noted included three Peacocks, a Brimstone and several Orange-tips.

Today was the all day bird count which takes place across a number of Reserves in the Midlands and the Marsh Lane tally was 83. A full list is below.

The best of the records, were the first Swifts and the first Cuckoo of the year. The former went north over Siden Hill Wood in the morning and the latter, presumably a female, was seen around the car park on a number of occasions throughout the day.

The only other migrants in the true sense were a summer plumaged Dunlin on Railway Pool for part of the day, a Common Sandpiper that was seen in a number of places and a Wheatear which was present again around the Dragonfly Pond / Concrete Road area. A Red Kite flew north over the car park at 1.45 and lingering winter wildfowl included a pair of Shoveler and a pair of Teal. 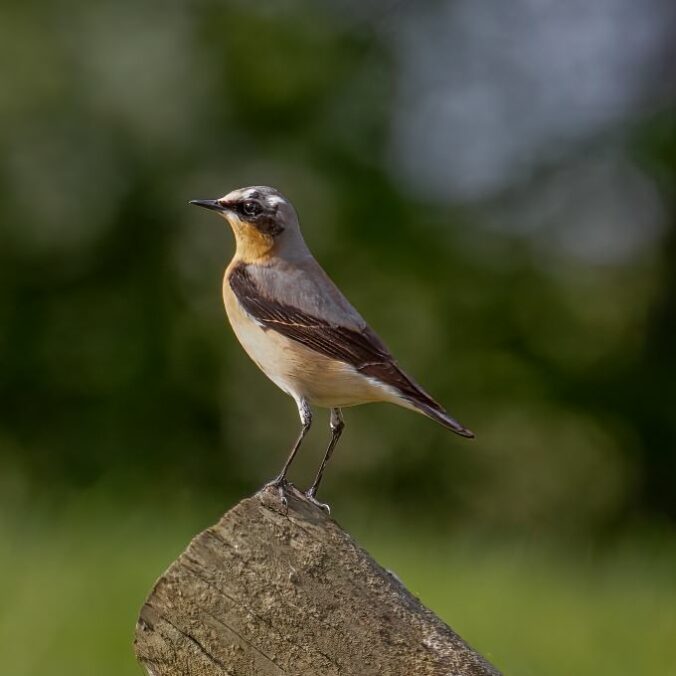 The warm weather brought out plenty of Orange-tips, three Brimstone and a Comma, together with one Large White and a good number of Green-veined Whites. Odonata extended to two Banded Demoiselle and a Beautiful Demoiselle, all on the Old Road, and five Large Red Damselflies around the Dragonfly Pond.

Other than a Redshank and the Oystercatcher pair with two young on the Car Park Pool islands, there were no other records today. 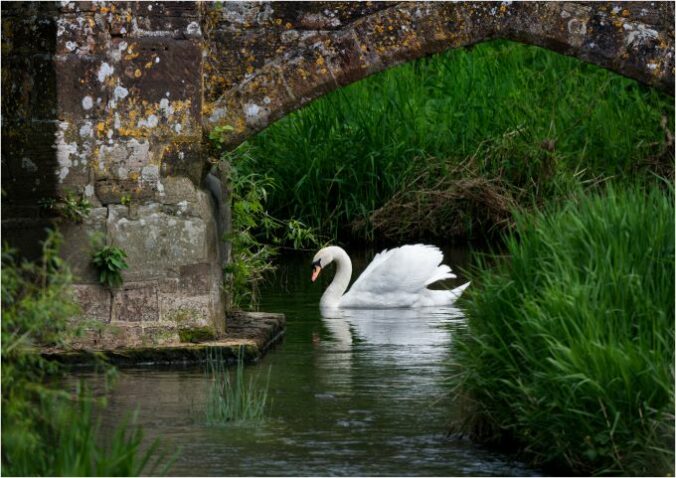 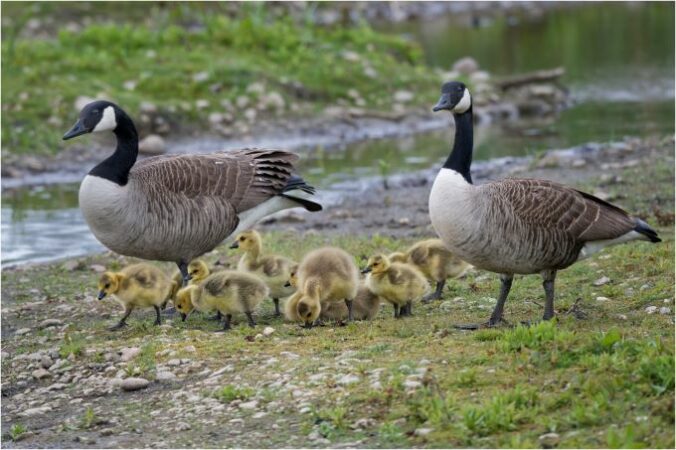 An Artic Tern went through high and direct to the north at 9:20. A Peregrine and three Ravens were also seen.

A White Wagtail appeared briefly on Car Park Pool and there were at least 25 Common Terns. Two first-summer Mediterranean Gulls put in a brief appearance.

On the floodplain there was a Common Sandpiper and a Little Egret and along the Concrete Road later in the day, a male Wheatear together with a Whitethroat there. Presumably, a different Common Sandpiper was recorded from Oak Hide in the evening where there were two pairs of Canada Geese with Goslings three and five.

A male Wheatear was seen briefly around the Concrete Road in the afternoon. 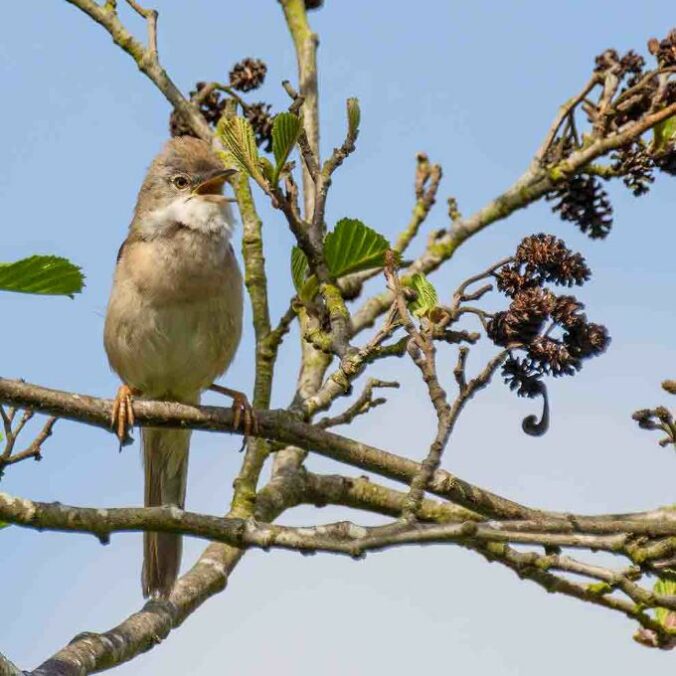 A Yellow Wagtail flew over the car park at 9am, another elusive one of this species. Few have lingered for any length of time so far this year.

Graham Rowling has done a count of Black-headed Gull nest and estimates 830 and there were two Mediterranean Gulls present today, a second-summer and a first-summer. The female Goosander was seen again along with five Little Ringed Plovers and a Common Sandpiper.

A female Muntjac was on the edge of Railway Pool and there was a dead Fox Cub by Railway Hide where I think they may have den.

At about 12:30pm a Great White Egret came into Car Park but was chased off by Gulls towards the floodplain but there was no further sign. A pair of Red-legged Partridge were seen along the Concrete Road and the Garden Warbler was again in song by the car park gates. 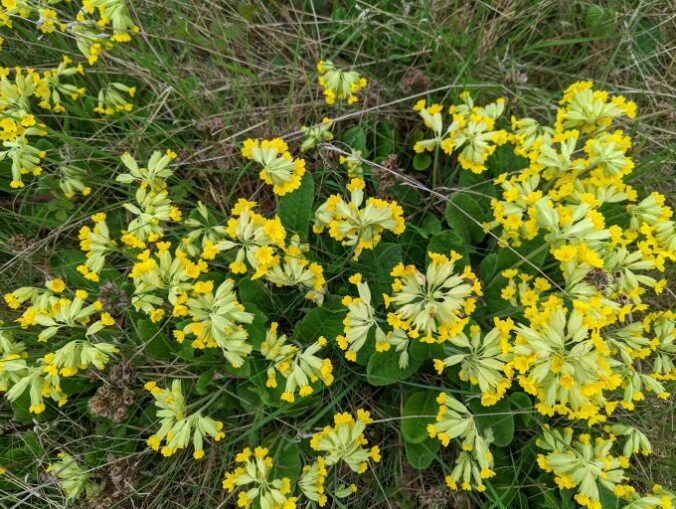 A Whimbrel was the bird of the day, coming in late morning and was still present into the mid afternoon period showing well and feeding on the grass in front of Car Park Pool.

The male Channel Wagtail with the female Yellow Wagtail were again briefly on the floodplain but quickly disappeared.

There seems to now be just one singing Willow Warbler left by Railway Hide. All other main Warblers are in with the Lesser Whitethroat wandering up and down the Old Road but favouring the area along the top stream but occasionally making it to the Car Park Gates.

In the late afternoon, the Fox was seen to take a Lapwing chick on Railway Pool and the animal was patrolling the Margins in front of Oak Hide in the evening when a work party carried out more translocation of Yellow Flag to supplement the cover in the Marsh and on the islands.

Also, in the evening there were seven Pied Wagtails on the floodplain and a female Goosander could be seen on the river. 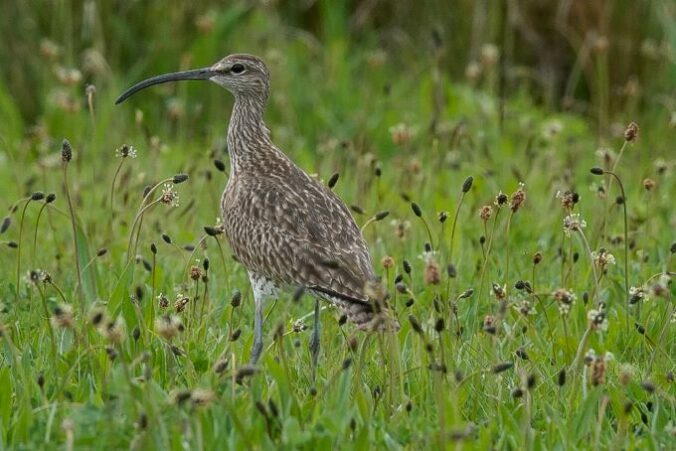 A mobile female Wheatear was seen between the underpass, the bale store and the old Aero Modellers field during the day and a Dunlin was also a new arrival.

The female Goosander with two ducklings was viewable on the river from the floodplain gate. A male Teal and a pair of Shoveler were the other wildfowl of note.

In the afternoon, there were 18 Pied Wagtails and ten Starlings on the floodplain along with five Egyptian Geese. A good gathering of hirundines was subject to constant turnover. The birds were feeding up and down the river although concentrating towards Patrick Bridge and the maximum at any one time was 25 Sand Martins and two Swallows. Singing Garden Warblers were present at either end of Old Road, one by the Dragonfly Pond and one by the cottages.

Weather was cool with some drizzle.

A female Yellow Wagtail appeared briefly on the floodplain but did not linger, similar to the others in the previous few days.

Other bits and pieces included two Common Sandpipers on Car Park Pool along with four Little Ringed Plovers, three Teal, a pair of Shoveler and a single Redshank.

In the middle of the afternoon there were at least 20 Swallows and two each of House Martin and Sand Martin over the north end of Car Park Pool.